“We ended the third quarter of 2015 with a year-to-date origination volume of , and we are on track to originate this year. The year-to-date origination volume represents approximately a 40% growth over the same three-quarter period of 2014. This has been the result of growth in our legacy verticals as well as new verticals added in 2015. The opportunities to empower small businesses for success are great with approximately 1,000 industries eligible for the SBA’s 7(a) program. We are focused not only on building out our existing verticals but incrementally adding new verticals to our lending portfolio,” said , Chief Executive Officer of Live Oak.

Mr. Mahan continued, “We are very excited about the continued growth and expansion of quality small business lending at Live Oak. We are putting the capital raised in our IPO to work. We are successfully growing the number of verticals in our loan portfolio, and we have launched our new small loan platform, eLending.”

Highlights of the third quarter of 2015:

Compared to the third quarter of 2014, the increase in total noninterest income was primarily due to an increase in net gain on sale of loans of offset by a loss from the revaluation of servicing assets.

Credit quality improved as the unguaranteed exposure of nonperforming assets declined to at from at .

On , the Company completed an initial public offering issuing 5,500,000 shares of voting common stock, no par value, at per share for gross proceeds of . Net proceeds after underwriting discounts and estimated expenses were . As a result, the Company has continued to finance existing vertical growth, invest in strategic initiatives, support higher levels of loans remaining on the balance sheet, and curtail long term debt.

Live Oak will host a conference call to discuss third quarter results at (). Media representatives, analysts and the public are invited to listen to this discussion by calling (877) 787-4170 (domestic) or (530) 379-4723 (international) with conference ID 58726545. A live webcast of the conference call will be available on the Investor Relations page of the Company’s website at http://investor.liveoakbank.com. After the conference call, a replay will be available until , and can be accessed by dialing (855) 859-2056 (domestic) or (404) 537-3406 (international).

Statements in this press release that are based on other than historical data or that express the Company’s expectations regarding future events or determinations are forward-looking within the meaning of the Private Securities Litigation Reform Act of 1995. Statements based on historical data are not intended and should not be understood to indicate the Company’s expectations regarding future events. Forward-looking statements provide current expectations or forecasts of future events or determinations. These forward-looking statements are not guarantees of future performance or determinations, nor should they be relied upon as representing management’s views as of any subsequent date. Forward-looking statements involve significant risks and uncertainties, and actual results may differ materially from those presented, either expressed or implied, in this press release. Factors that could cause actual results to differ materially from those expressed in the forward-looking statements include changes in (“SBA”) loan products, including the Section 7(a) program, or changes in SBA standard operating procedures; a reduction in or the termination of our ability to use the technology-based platform that is critical to the success of our business model; market and economic conditions and the associated impact on us; operational, liquidity and credit risks associated with our business; and the other factors discussed in the Company’s registration statement on Form S-1 (File No. 333-205126), as amended, and most recent Quarterly Report on Form 10-Q, filed with the (“SEC”) and available at the SEC’s Internet site (http://www.sec.gov). Except as required by law, the Company specifically disclaims any obligation to update any factors or to publicly announce the result of revisions to any of the forward-looking statements included herein to reflect future events or developments.

(Nasdaq:LOB) is the parent company and registered bank holding company of , a national online platform for small business lending. 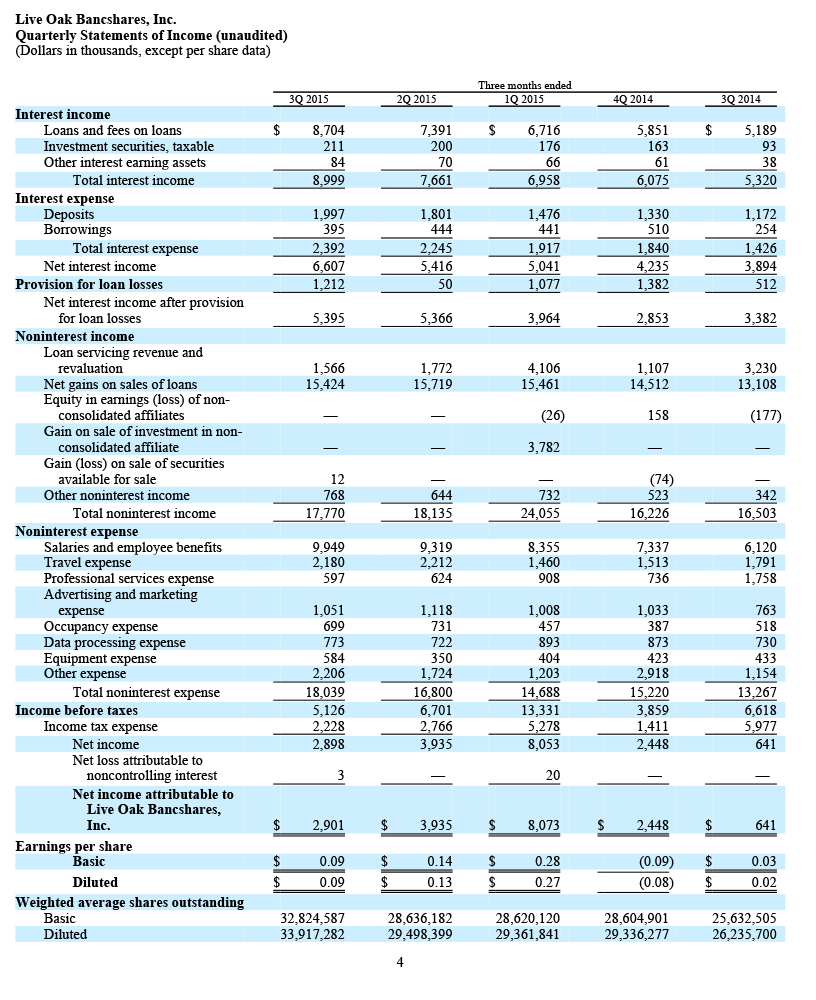 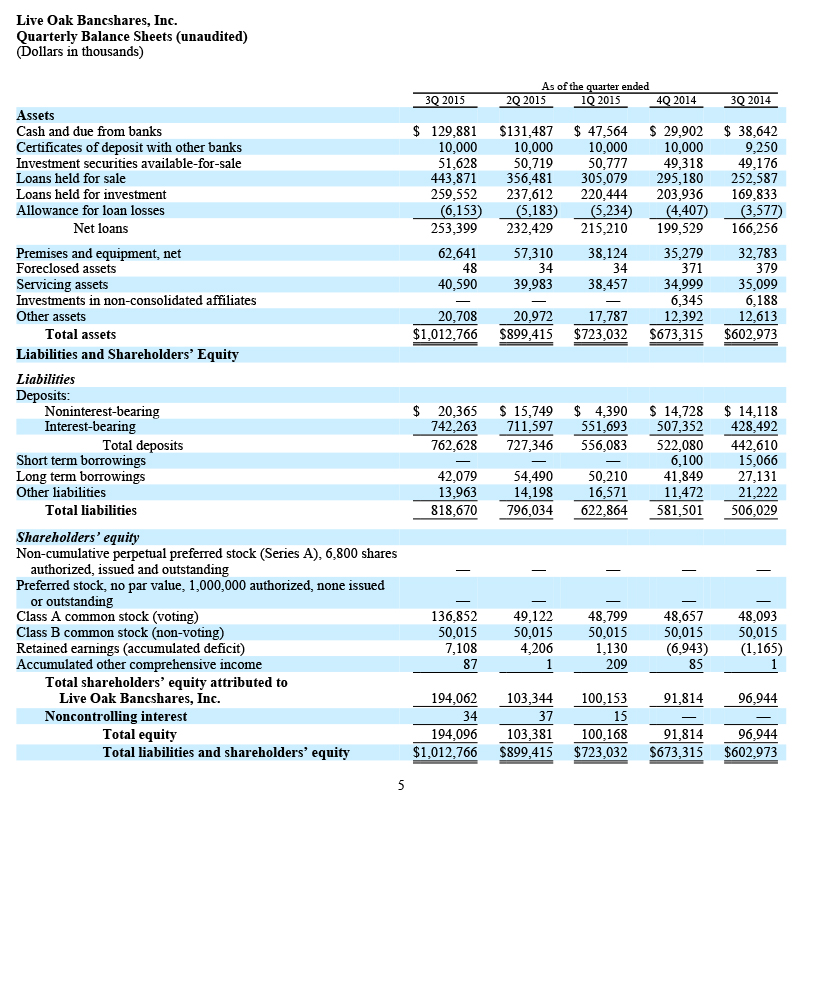 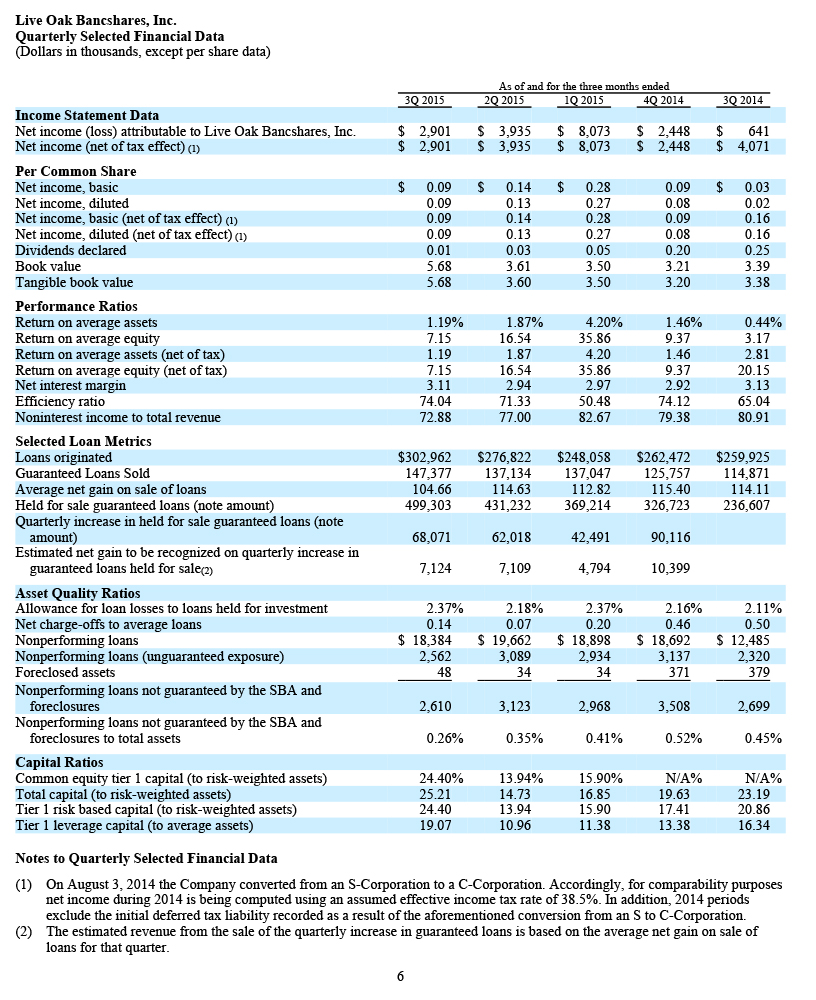 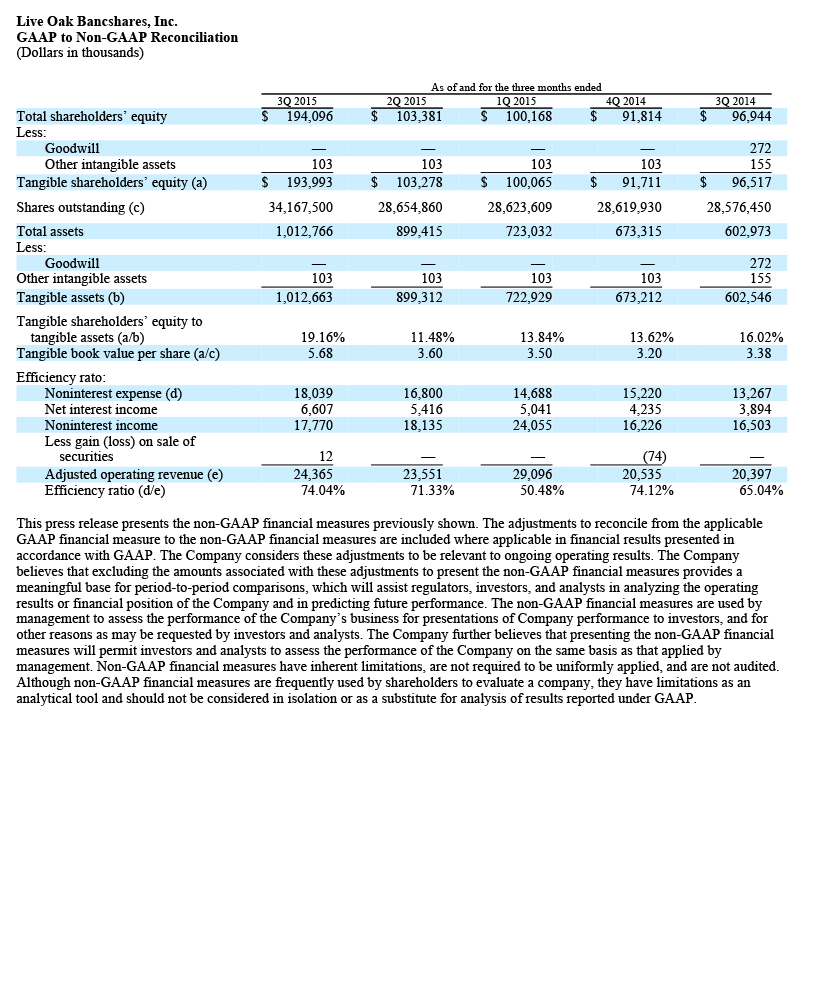